The much anticipated changes to Qatar's labour laws to were announced in the form of proposed changes at a press conference. Qatari authorities calling the changes to the labour law as a “project” that will govern the entry, residency and exit of expatriates into and from the country, announced that the Council of Ministers of the State of Qatar had "in principle" accepted the proposal for reforms. Though no fixed timelines have been given as to when the reforms would be enacted, it has been indicated that the proposals have been referred to the Shura Council and Qatar Chamber. Details will be announced once they come back to the Council of Ministers with their views. 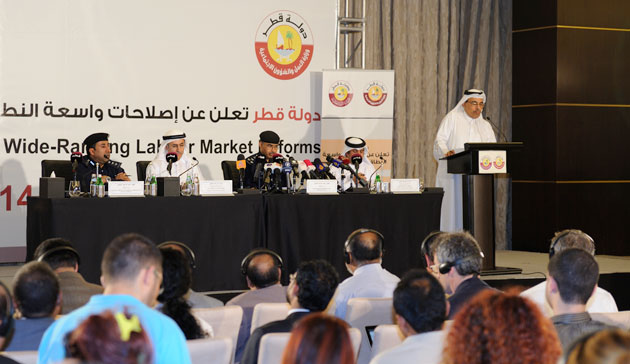 The much awaited announcement of reforms to Qatar's labour law was revealed, however no mention of a timeline on implementation of the proposed laws were made.

Representatives of the Ministry of Interior and the Ministry of Labour and Social Welfare announced the labour market reforms, which, at this stage, are a series of proposals, rather than actual law, which are pending approval from the Shura Council and the Qatar Chamber.

Brigadier Muhammad Ahmad Al Atiq of the Ministry of Interior said that the proposed changes to the labour market has been an ongoing “project” of the government, to which Colonel Abdullah Saqr Al Mohannadi added that the State of Qatar is committed to guarding workers’ rights and reforming existing labour laws, adding, “We are ready to listen to the views of the people in the country and we respect our own constitution and international agreements on human rights.”

In response to a question from the audience on which category of workers would come under these proposed changes, it was stated that all workers, including domestic workers will come under the new law.

Asked whether these changes to the labour market were being undertaken on the back of international human rights groups, Colonel Al Mohannadi from the Ministry of Interior stated that these changes were rather a result of the government’s intention to safeguard workers’ rights in the State of Qatar.