Driven by economic growth and the creation of new jobs in non-oil sectors, the demand for properties continues to grow, causing an increase in real estate prices. by Syed Ameen Kader 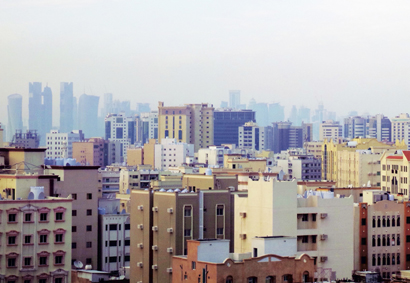 Despite the subdued effects of the weakening oil price that generated a degree of caution among investors, Qatar’s real estate sector has seen property prices rising in some areas due to a consistent growth in migrant population.

According to Qatar Statistics Authority, the country’s population increased by 9.5 percent over the 12 months up to the end of March 2015. Driven by job creation in the non-hydrocarbon sectors, the population growth has resulted in increasing demand for family accommodation, mainly for four- and five-bedroom villas, where, according to DTZ’s Q1 2015 report, occupancy rates are currently high. The rental rise has also been seen in the mid-range apartment segment, particularly around Al Sadd area. DTZ has observed a rental increase between five and 10 percent in selected developments in recent months.

Mark Proudley, associate director, head of consulting and research, DTZ told The Edge, “Our view is that the falling oil prices have stabilised the market by introducing a degree of caution amongst investors, which is reflected in the Qatar Central Bank (QCB) Real Estate Index.”

Proudley added that the initial impact is being felt within the occupational markets with a number of companies active in the hydrocarbon sector or government-related seeking to rationalise costs, reducing employee numbers and increasing occupational efficiency.

Though the recent price rise has been slightly contained by the restraint shown by oil and gas companies towards taking on new residential accommodation, the strong demand from other sectors kept the pricing index upwards.

Nick Witty, director, Real Estate Advisory, Deloitte, added, “Short-term demand resulting from the significant economic diversification being witnessed in the country is primarily responsible for driving prices upwards.” He furthered new companies are entering the market to work on various infrastructure projects, and they require office and residential accommodation for their staff, and, as such, it is these two sub-sectors of the market which are experiencing rental inflation the most.

The rise in both sale and rental housing prices are also being driven by high land cost that is making the construction of these properties more expensive. The growing land price has been a major concern, which was also highlighted by the International Monetary Fund (IMF) in their recent country report for Qatar.  The global body has called for remaining vigilant about “overheating risks”.

“Policymakers can take additional steps to ensure adequate supply of land and affordable housing. To reduce any speculative pressures by cash investors in the real estate market, consideration should be given to raising real estate transaction fees, which are at 0.25 percent low by international standards,” noted the IMF’s country report, released in March 2015.

Industry observers feel that further land price growth is not sustainable for the market, as certain districts have already reached a level, which is not financially feasible for developers to build. “Increasing prices will ultimately mean that development projects will become unviable and will not go ahead with investors withdrawing until market forces restore the equilibrium,” said Witty.

According to Proudley, the main impact has been that high land prices are prohibitive to development of low-to-medium-cost housing in the traditional city centre areas such as Msheireb Downtown Doha or Bin Mahmood. New low-cost housing is now being developed on the outer suburbs of Doha in areas such as Wukhair and, Proudley felt, this trend will continue as Doha expands and matures as a city.

Gaurav Shivpuri, head of capital markets, MENA for Jones Lang LaSalle, cautioned that rapid value spikes in any sector are usually unsustainable and create a risk of a market bubble. “Real estate is no different and the rapid value increases that have been witnessed in Qatar were a factor of the demand supply gap. As the gap diminishes the value increases will slow down to more long-term sustainable figures,” he said.

Moving forward, industry experts have predicted, the outlook for all the market segments is relatively positive in the short term, though longer-term prospects are more risky due to looming pipelines of supply across all real estate asset class sectors.

Expatriate Games: Do foreign workers have a future in Qatar?

Doha as a renminbi clearing city